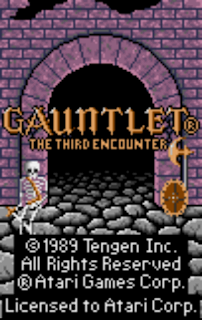 When I was younger I loved the two Gauntlet games. I had them on a compilation (I forget which now) for my Speccy, and my local arcade had the full-on four-player version of the first game there for years, so I had lots of opportunities to do my Gauntleting. They were very high-profile games too, but it wasn't until years later I realised... where the hell was Gauntlet 3? Well, as it turned out, there were two different takes on a third game in the series and neither was anywhere near as high-profile as the first two. One was made by Software Creations for the 8 & 16-bit home micros and was not very Gauntlet-ish. The other was developed by Epyx and released only on the handheld console they developed - the Lynx. Would it prove to be any more Gauntlety than the weird home micro offering? Yes it would, as it turns out, but it's still far from a typical Gauntlet game. 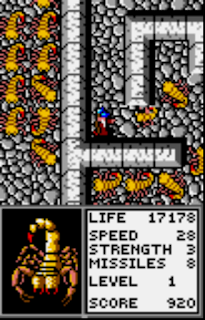 For one thing, the game is set, I believe, in what was the present day (i.e. 1990) and concerns a 'haunted castle' that stands atop a 'nearby' mountain. It is here that a 'star gem' supposedly fell from the sky 'generations ago' and must now be liberated by you (and some optional friends). The castle consists of forty mazey levels, viewed from overhead and designed in a reasonably Gauntlet-ish way, and to finish each one you have to battle through many evil creatures, but that's about where the similarities end. Well, kind of. There are now eight characters to choose from who differ in their speed, strength and missiles(!) abilities, but only two of our favourites return - Valkyrie and Wizard. The rest of the party is, rather disturbingly, made up of - Android, Pirate, Gunfighter, Nerd, Punk Rocker and Samurai. I hope that upsets you as much as it does me. 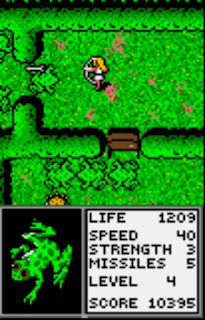 Being a fiercely loyal (and sane) retro gamer, I have of course only used the Valkyrie or Wizard when playing so I suppose this isn't as comprehensive a review as it should be, but the deviations from the correct Gauntlet format do not end there, as you may have already seen. Indeed, for there are no grunts, demons, or even pesky lobbers in sight here. There are some spooky ghosts but aside from these, the cast of enemies is completely new and includes scorpions, frogs, bugs, shark fins, swamp monsters, cactuses (no, that's not a typo), and other decidedly un-Gauntlet-like foes. They aren't produced by generators anymore either, there are just groups of them here and there, with the odd one or two then also seeming to appear from nowhere in previously-cleared areas as well - grrr! Still, at least the horrific monstrosities don't respawn. 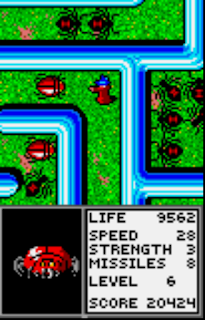 One of Gauntlet's features that is retained is the gradually-decreasing health (or 'life' here), although you start with 20,000 which is considerably more than previous games. There are also lots of lovely collectibles to look out for, although you can only carry a set number at once, and you have to select them from a menu to use or drop them. Probably most common are the keys which, as before, are required to open the many doors. There are also two types of apple for replenishing a little health, and numerous types of potion which improve one of your character's abilities, but only for the duration of that level. You will also find scrolls now and then which do something similar but the effects last for the rest of the game, and they can also give you stuff like temporary invisibility and the ability to view the whole level if you've gotten lost. 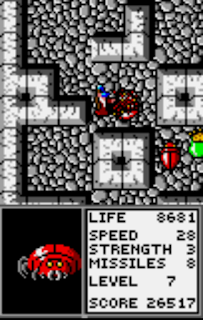 Lastly, and slightly oddly, there's also lots of treasure dotted around. This isn't odd in itself but what is odd is that you can use it to buy apples, potions, etc, from the computer terminals you'll find periodically. Yes, computer terminals, in a castle that has lain dormant for 'many generations'. Okay, maybe I'm nitpicking a bit now but come on man! Actually, I must admit, if you have the strength to overlook all of this sacrilegious stuff and a few other features like a venus flytrap thing that spits you over walls, Third Encounter does play more like a Gauntlet game than it looks. Indeed, the objective here remains the same as always - simply find the exit. There are a few light puzzley elements here but your means of achieving this objective are pretty much the same, although the exit is a floopy blue warp thing rather than the usual black square with 'exit' written on it. 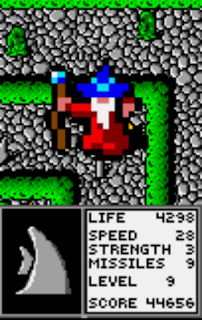 Actually playing the game may prove challenging for some though. This is because, as the eagle-eyed among you may have noticed, it makes use of the Lynx's vertical mode. I'm not totally sure why if I'm honest - I can't think of any advantages it offers as the playfield here is roughly square. Players do get an unusual 'radar' screen which is basically a window giving a first-person view showing enemies/items from further away than in the main window. The graphics are a little disappointing generally though. The sprites are decent and the typical chunky, pixelly Lynx style is present and correct, but there is very little variety between the levels. You get just two floor patterns and three types of wall, all of which are represented by the screenshots here. That's until you get near the end of the game when things get a bit spacey (yes, in a castle), but still. 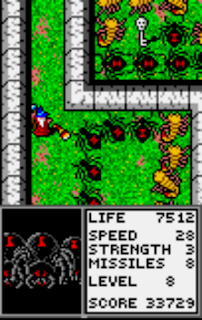 Even the Speccy version (of the first two games) had more than that! The music is decent enough except that there is just the one tune and, assuming you're good enough to reach the end, the game goes on for at least two hours, so both your eyes and ears will probably be aching a little by then! It's also a shame the levels aren't presented in a random order as they are in Gauntlet 1 & 2 (kind of) and some of the early ones will be a bit of a chore to repeat over and over, but aside from this and the lack of audio/visual variety, it is fairly enjoyable to play though and presents a decent challenge. It seems really tough to start with but once you start making effective use of the potions and scrolls, you should make some real headway, although as mentioned, the decision to use the Lynx's vertical mode makes things a bit awkward for those playing on the original hardware. Given all the inconsistencies with established Gauntlet lore, it probably also helps enjoyment of the game, at least for fans like me, if you don't think of it as part of the series at all (it didn't come as a surprise to find that it wasn't developed as one initially). Some things about it made me grimace, others are a little disappointing, but it's not a terrible game overall, and Lynx fans don't have too much in the way of alternatives anyway. So for fans of the handheld, it gets a tentative recommendation. As an official Gauntlet game, however, and compared to the first two? Nooo no no no no noooo!

Gameplay Video: here's a video of the whole game being played by one of the talented fellows at World of Longplays (check out their great channel here). Oh, and don't watch if you want to avoid spoilers!