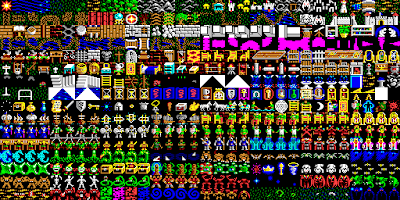 The tileset posting continues! Ultima 5 boasts 512 tiles (compared to the 256 of Ultima 4), and one can easily tell the difference when playing both games. Overall, however, there is a lot of wasted nonsense like the pink "Shadow Realm" tiles, "sitting down" tiles, and the four-frames of animation for everything.
The class sprites are greatly reduced, no more Tinkers, Druids, Paladins, Wizards, Rangers, Fighters, Shepherds, or Bards... instead characters use either the "Rogue," "Knight," or "Wizard" sprite. Yet, with the lack of diversity, the artist uses space within the tiles more more effectively by filling in more space (so there is less black) and making everything look realistic through shading and eliminating the representation of unimportant/awkward sprite features such as necks.
As far as gameplay is concerned, I'm making good progress in Ultima 5, although some of the new mechanics are annoying at best. Picking up loot has become a veritable chore, and the DAY/NIGHT system is poorly implemented as far as I can tell. Basically there is nothing new to explore at night, and the towns and shops close down in the dark.
On the positive side, the player is no longer burdened with protecting his or her Avatarhood, and can lie, cheat, steal, run away from fights, and murder like the good old days of Ultima 1-3.