Over the past few months. I mainly worked on a few small game / demo / intro projects. There have been times where I have been doing more on my game project. I noticed that it has been a few months since I last did some more Cruiser-X 79. This was because I was literally unsure what to do next after the alien movement patterns. The main game engine is more or less finished (except for the bugs that are still left in the game). The only thing that is missing for the main game code are the level graphics. That is up to Saul :).

Okay, so if I cannot code any more on the game, what shall I do now. I decided to work on the front end for the project. The title screen graphics are still there. So it wasn't much of a problem to import them into the game project. I also did a mock-hi score table. The front end is not 100% complete yet, but it does look quite nice (and erm - green, ha, ha.). The title screen also uses the same music as I used in the playable preview. Since the music was made for the title screen anyhow. 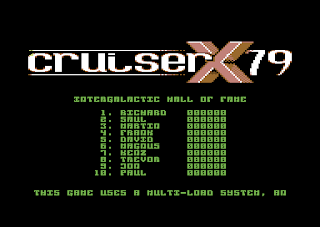 The title screen appears to look nice, but it does need some kind of action in the scene to make it look less boring. The game is supposed to be a space shoot 'em up so I might add some kind of star field like I did with Zzapped in the Butt DX. There are characters free for this cool effect.

Another thing I need to add, which I decided to do this hot and sticky afternoon is add a disk loader system to load the main game. This is only for testing purpose, as no level packing has been done yet. The game currently loads through the SFX de-crunch routine from Exomizer. Eventually changes will take place in this project because I will need to make alternative plans. 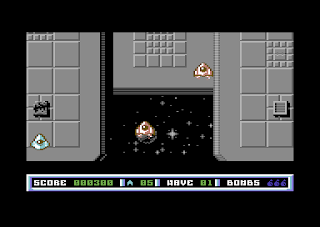 I took note of all of the memory which current data from the title screen and the game used. I need to do this in order to  allow the loader system to load the data to a range in memory in the game, where it cannot overwrite important data or code. Then the data can unpack from that area to the target memory at range. The game loader will need to be split into 4 different files. They are as follows:

Each of these files (once received) will be fed to the Exomizer using the mem -l  prefix. The Exomizer de-crunch source (which I used on Starfysh Remix) will be used to unpack each file respectively to the correct memory bank of where the original charset, tile set, map and music lies.

More on this next time I get onto it :)