If you're looking for even more great C64 news then you've come to the right place, as trawling through our twitter feeds, we've come across another video update for Carleton Handley's upcoming Action Platformer of Runn 'N Gunn; a game previously mentioned by Per Ola and Saberman and featured on Indie Retro News, that looks to have great background detail, smooth scrolling and rather nice sprite

The post Alien Pinball by Pinball Brothers: The Beast Is Back first appeared on AUSRETROGAMER.

Just a couple of weeks after the release of version 5.5.0, Atari800MacX 6.0.0 is out with not many functional changes, but with an important update that will ensure the emulator will stay work on macOS for many years to come. The emulator app bundle now includes both binaries for Intel...
We turn our attention to the ZX Spectrum now for some retro gaming goodness, as if you love playing Arcade games whereby rescuing hostages is the aim of the game, then you might like playing ' Agent Blue' developed by José Silva, Jaime Grilo and IK (Artur); a typical arcade game for the Spectrum 48K (no music) / 128K (with AY music) made using AGDX (a modified version of Arcade Game Designer 4.7)
Realms of Genthar (WIP Dungeon Crawler Screenshot)Something slightly different for the start of this weeks retro heads up, as if you are a huge fan of Dungeon Crawlers, especially games such as Eye of the Beholder or Lands of Lore or want to create a new Dungeon Crawler, then as March 31st 2021 at 11:00 PM to April 7th 2021 at 11:00 PM a new competition is taking place called the "Dungeon Crawler
I thought to myself today it's been some time since we had any Zelda style games on Indie Retro News, but thankfully I came across one that doesn't only look like a Zelda game, but it could be the next best thing for any Amstrad Plus owner. Titled as 'La Culotte de Zelda' and created by Zisquier, with graphics by BDCIron, this is going to be an adaptation of "The Legends of Zelda" which came out
1942 (1984)
By: Capcom Genre: Shooting Players: 1-2 (alternate) Difficulty: Medium-Hard
Featured Version: Arcade First Day Score: 62,520 (one credit)
Also Available For: NES, Game Boy Color, PC-88, Fujitsu FM-7, Sharp X1, MSX, Commodore 64, Amstrad CPC, ZX Spectrum 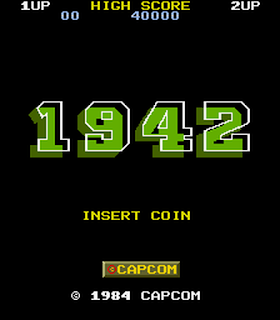 Capcom have been responsible for some truly wonderful games over these long years but one series that seems to be somewhat overlooked nowadays is the 19XX shooter series. It isn't even one of the 13 series mentioned in the company's summary on Wikipedia! What has the series done to deserve such scorn? Does it suck ass? I doubt that, but in order to find out I will play through the entire series starting with this original which graced arcades long before their mighty CPS boards were introduced. It is therefore a simple enough game as you might expect. Rather surprisingly for a Japanese-developed game, however, it sees you on the side of the Americans against the entire Japanese Air Force! 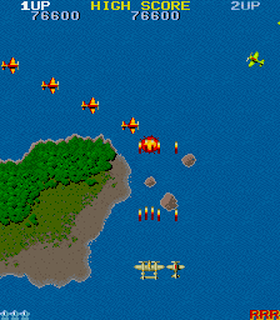 I'm not sure if this set-up is recognition of their aggressive actions during WWII or simply an attempt to appeal to the overseas market but nonetheless, you are placed in charge of an American P-38 Lightning fighter plane with which you must battle your way from the Pacific theatre all the way to Tokyo during the titular year, destroying as many enemy aircraft as you can along the way. Well, that's what we're told by the game's blurb but the action is actually confined to the Pacific Islands as far as I can tell. There are a remarkable 32 stages in all, stretching from the Midway Atoll all the way to Okinawa by way of various stops in between, with four stages taking place in and around each location. 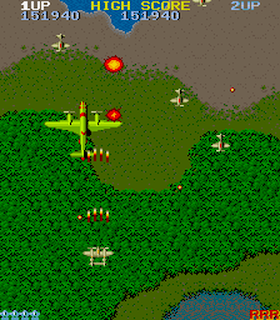 Your targets through these stages are all aerial - no tanks or guns here - just a few types of Japanese aircraft flooping about the place. Most are small fighters which zip across or down the screen seemingly at random, with some heading back up the screen after reaching the bottom. Only one kind offers powerups though - the orange ones which are also the only ones to fly in formation. Destroy a whole squadron and you'll get a POW symbol which will either boost the power of your basic cannon, give you a couple of small escort fighters, or blow up all enemies on screen. There are also a few larger aircraft that show up now and then too, and they usually arrive from the bottom of the screen, so watch out! 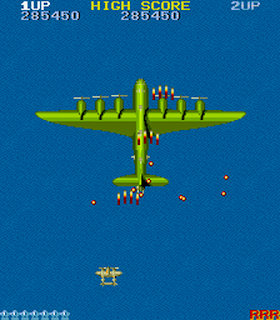 These include fighters slightly larger than your own (below) which appear in ever greater numbers the further you get into the game, a larger bomber (above) which turns up twice per stage, and a huge gunship (left) which you'll see four times through the game. That's about it for the enemies though. Aside from the gunship, you'll see each type of enemy from the first stage to the last, although I believe they are based on real Japanese aircraft from the time so I guess it's just being realistic. That goes for the stages as well. There isn't much variety - certainly no forest stage, desert stage, ice stage, etc - all stages begin and end on an aircraft carrier and all of them stages take place at least partially over water. 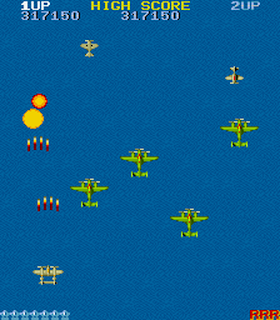 This is another thing that just makes the game surprisingly realistic for its day. Of course, it could've just been an excuse to be lazy and only make a few levels-worth of graphics and just jumble them around for each stage, but it works, even if it does make the game repetitive. It's even more repetitive in terms of audio, with the 'music' restricted to a few jingles and a strange repeating whistling sound in-game. Fortunately it's more enjoyable to play than listen to, with its consistent nature making it addictive to see how far you can get. It is a real challenge to get anywhere near the end on one credit though - the stages are quite short but it will still take a determined pilot over an hour to get through them all, and besides the basic power-ups the only help you get is a few vertical-roll manoeuvres per life which can be used as last-ditch attempts to avoid enemies and/or their bullets. The sections over land are usually much more challenging than the watery bits too, as the enemy bullets can often be tough to spot. The game's unusual length notwithstanding, however, it's certainly not the toughest game I've played from this era, and the decent controls and collision-detection means it's not often unfair either. The sequels obviously offer flashier visuals and greater variety but this original is still a decent shooter in its own right too.

Gameplay Video: here's a video of the whole game being played by one of the talented fellows at World of Longplays (check out their great channel here). Oh, and don't watch if you want to avoid spoilers!

Our friend and Atari developer extraordinaire, Howard Scott Warshaw, you know, he made Yars’ Revenge and E.T. amongst other notable Atari 2600 games, has released his new book, Once Upon Atari: How I Made History By Killing An Industry, which is available right now on Kindle and Paperback. Upon the release of his new book, Howard […]

The post Once Upon Atari: How I Made History By Killing An Industry first appeared on AUSRETROGAMER.

Time to celebrate the most successful MSX image host

New translation patch for one of the best MSX2 games ever.

If you remember games such as Arkanoid; an arcade game first developed by Taito in 1986, with the bat like device scrolling from side to side at the bottom of the screen, bouncing an orb back and forth and smashing blocks for a high score. Then you might like this rather unique Amstrad demo. As in 'BriXen' a CPC GAMEDEV CONTEST 2020 WINNER by Crazy Piri, you must bounce a coloured orb around the
Sometime back we mentioned the classic game of H.E.R.O, which was first released way back in the 1980's for the Atari 800/2600, ColecoVision, C64, C128, and Sinclair ZX Spectrum, was not only being overhauled for the C64 but was also coming to modern systems as an inspired game called 'Bobby Bombastic'. Well if you've given up waiting for those games but still want some H.E.R.O platforming fun,
Rainbow Edge Run DX is an extended full version of the Rainbow Edge Run 4k game that was submitted to the 2020 Reset64 4KB Craptastic Game Competition. At the time, the game didn’t win, getting only 11th place, but that is only a testament that the competition is really tough. Rainbow Edge Run...
Shine's currently on fire: Alpha! PETSCII power at its best.
For those of you who love playing the 1991 hit strategy game of Civilization will be interested in this piece of news, as Daniel Blake has let us know through Facebook, that you can download the latest version of Free Mars by arikande; a turn based strategy game about colonizing Mars, which is also heavily inspired by that classic game Civilization intermixed with the Mars scenario which can be
In May of 2018 Scotty of Indie Retro News did a big review of the ZX Spectrum game Nixy The Glade Sprite, in which he said " It was a very fun and addictive game that casual and advanced players should try especially with its beautifully crafted visuals". So why is this game getting a mention yet again on IRN? Well it seems as if the C64 is about to get in on the entertainment, as Bubble Soft
A large pack of covers scans, cassette photos and TAP files have been added courtesy of Lacus and Charlemagne. Thanks guys!

By: D.C. Cutler, U.S.A. There were a lot of “Doom” copycats after the game’s enormous success; “Bloodwings: Pumpkinhead’s Revenge” is probably the most unusual rip-off. There are moments while playing it where I’m not sure what my objective is or if there even is an objective. Clips from the “Pumpkinhead” sequel are spliced into the game. The […]

The post The Worst DOOM Copycat first appeared on AUSRETROGAMER.